At just 10 millimeters thin, the Predion E10 provides maximum maneuverability around the net.

The minimal paddle volume and low air drag allows you to be more agile and easily switch from forehand to backhand during quick net volleys.

At 16.75 inches long, the Predion E10 is the longest, edgeless pickleball paddle available. It allows you to reach shots you couldn’t reach before and attack lob attempts with powerful overhead slams.

When you need a powerful overhead slam or drive from the baseline, the Predion E10 delivers.

The Predion gets its force from paddle speed and the aramid fiber honeycomb core that delivers more energy back to the ball.

At just 8 ounces and with minimal volume and low air drag, the Predion E10 can deliver effortless acceleration, translating into tremendous force and power.

And as speed increases the farther away you get from the axis of an arc, the elongated Predion E10 gives you longer arc strikes, further increasing power.

Even backhands from the baseline can be performed with an effortless flick of the wrist.

With its unidirectional carbon fiber facing, the Predion E10 is very much a control paddle too, allowing you to drop shots into the kitchen and effectively compete in soft dink battles.

And because carbon fiber is more stiff than other materials, it provides a low deflection rate and allows you to place your shots with tactical precision.

The Predion E10 uses an aramid fiber honeycomb structure for its core.

Aramid fiber is used in airplane and boat hulls, where high strength to weight ratios are crucial. It’s also used to make Kevlar, the fabric used in bulletproof vests.

The aramid fiber honeycomb structure core of the Predion is extremely tough and won’t breakdown like typical polypropylene cores.

Aramid also develops a stronger interfacial bond to the carbon fiber facing than polypropylene, thus minimizing any “dead spots” on the paddle.

Spin shots are created with the swing path of the paddle and the relative angle of the paddle face to deliver directional forces on the ball.

The 5 inch long handle and 4 inch grip circumference of the Predion E10 allows you to roll your wrist and easily manipulate the paddle face, creating the spin you desire.

Other manufacturers often use a polypropylene honeycomb core and sacrifice power for a quieter paddle. The end result is a paddle that goes “thud”. It’s the sound of your energy being absorbed by the paddle and not being fully transferred to the ball.

We chose otherwise for this paddle. The aramid fiber honeycomb core of the Predion E10 maximizes your power. The “ping” you hear is the sound of your energy being more fully transferred to the ball. It’s the sound of victory!

We think you’ll appreciate the audible feedback you’ll receive, knowing that your energy is not wasted when you hit the pickleball. It let’s you know how well you hit your shot and gauge it’s effectiveness.

Cheetah® pickleball doesn’t sell to retailers and doesn’t have to set higher prices in order to guarantee a 40% profit margin for them.

We only sell direct to you.

This also gives you the advantage of dealing directly with the manufacturer, in case return issues arise.

When you buy a Cheetah® Predion E10, you’ll receive 3 FREE strips of Cheetah® Edge Protective Tape. We recommend you place one on the top of your paddle to prevent any scratches or chips that can occur when you scrape your paddle on an outdoor surface. If you only play indoors on a wood floor, there’s no need for the tape. 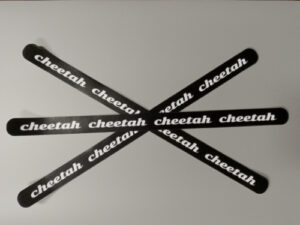 We’ll also include a FREE pair of Jorestech Protective Eyeware. These glasses are ANSI Z87+ Certified and provide UV (UVA and UVB radiation) protection. Plus, they have yellow tinted lenses that block blue light. And as you may know, blue light, with its shorter wavelength, scatters easier than other colors and makes focusing on objects difficult. Removing blue light improves sharpness, enhances contrast, improves depth perception and even reduces eye fatigue.

The Cheetah® Predion E10 is USA Pickleball Approved and ready for tournament play. Try it for 30 days. If you aren’t completely satisfied, you can return it for a 100% refund, as long as the paddle is in playable condition without any scratches or chips. All Cheetah pickleball paddles are also covered by a limited lifetime warranty against manufacturer defects. 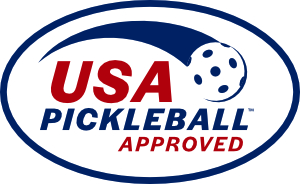